Pete Sternisha, a fellow student, arrived at Touchstone shortly before I did and, since we couldn’t check in yet, we wandered over to the firewood pile, where we had both found treasures in previous years. Pete pointed out a piece of well-seasoned cherry, with a large burl on it, that would become one of my finished pieces. Since he had his hands full with two very large pieces of cherry he had cut last year and had stored under the deck of the dining hall to season, I claimed the cherry burl piece as my own. I also found a piece of cherry, freshly cut, that had an interesting twist to it and used it as a starting point for what I thought was going to be my first piece. 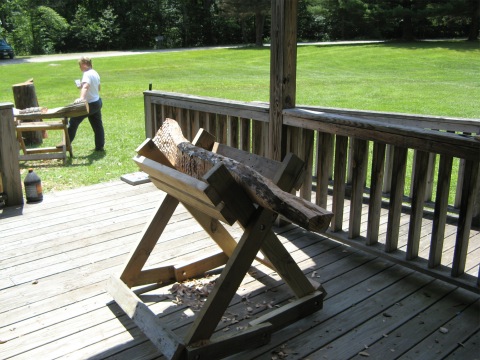 Sometimes, I get interested in movement and I thought that this piece might develop into an interesting piece. The method of sculpture that we have been taught by Chris Shackelford (in the background) is to use a chainsaw to make a series of cuts across the log after first marking the limits of the cuts with chalk. Then, the wood is removed with a large gouge and a mallet. What you see here is the log after quite a large amount of wood has been removed. Notice that there is a 90 degree turn from one end of the piece to the other.

Below, the piece is leaning against the railing. Terry Seya, another student, is studying one of her pieces in the background. I didn’t take that many pictures of my piece (my bad!) but I had started to carve one side convexly and was carving the other side concavely with a smaller gouge. I had also roughly finished the edges with a Surform tool to give a sharp edge to the piece. But I wasn’t enthused with my work and by Wednesday morning, after I had spent most of Tuesday working on a base for it, I disliked it enough that I was entertaining thoughts of cutting it in half and using the pieces in a different way. 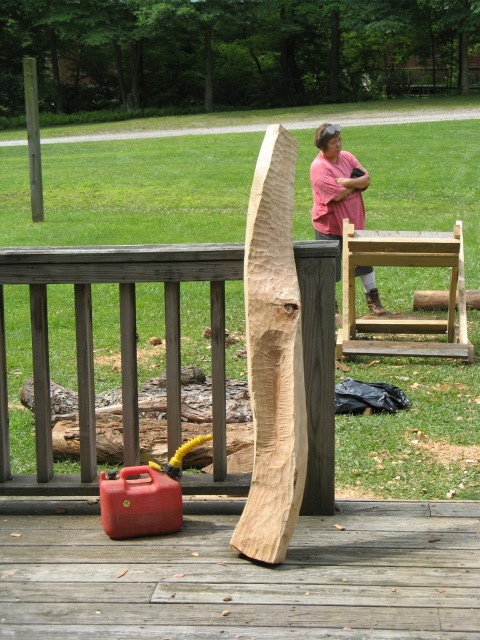 Wednesday morning, after breakfast, we went on a field trip to the Mattress Factory, an installation art museum in Pittsburgh. We were exceedingly fortunate to be sculpting at Touchstone at the same time that the long-time teacher of the class, Thaddeus Mosley (he no longer teaches the class), was having an exhibition at the Mattress Factory. We were also fortunate to have Terry and John Singleton, another student, as chauffeurs to take us to the show. I could never have found the museum by myself!

I was profoundly affected by the show. I had been very fortunate to be able to visit Thad in his studio in 2008, but I wasn’t able to spend much time with him then, so the visit to the Mattress Factory this year resulted in an epiphany, of which I will go into more detail soon. The next post, tomorrow, will be a slight detour to provide you with a little bit of information about Thaddeus Mosley.