While there are more than a few invasive exotics on my property, including Japanese Honeysuckle, a vine pointed out to me by my friend Fred First, of the Fragments from Floyd blog, I also have a few friends. Or, perhaps I should say, the wildlife have a few friends, for poison ivy is not something that most people tolerate well. One of my neighbors, however, claims that it doesn’t bother him – he breaks out in a mild rash at the beginning of the season and then it doesn’t bother him any longer. I’m happy for him, but I’ve read that the toxic substance in poison ivy is cumulative – you can handle it for years and then, when your body’s threshold has been reached, stand back – you could easily end up in the hospital due to tissue swelling that leads to blindness and breathing problems. While my neighbor claims it doesn’t bother him, I’ve always taken the more cautious route and avoided contact with it if at all possible.

Poison ivy (rhus radicans) is a valuable wildlife food, something that I learned some years ago, after cutting most of the poison ivy on my property here in Florida. From the Backyard Nature site:

“Poison ivy is a nuisance to people, but compensates by having considerable wildlife value. The white, waxy berries are a popular food for songbirds during fall migration and in winter when other foods are scarce. Robins, catbirds and grosbeaks especially like the berries. Many birds feed on insects hiding in the tangled vines. Small mammals and deer browse on the poison ivy foliage, twigs and berries.”

For those of you who don’t know what a large poison ivy vine looks like in the woods, here is a picture of a large one climbing a tree on my property: 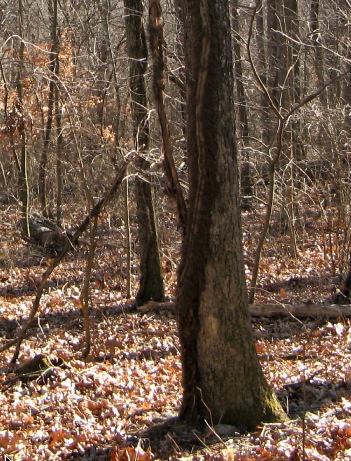 Not all poison ivy vines look like this one, however. Some do not have as many hairy roots as this one does. So be cautious when wandering in the woods – don’t brush up against plants that you can’t positively identify.