Last year, I worked for two days on a piece that I grew unhappy with and set aside, prophetically writing in a post last year “that I was entertaining thoughts of cutting it in half and using the pieces in a different way.” I reworked the base of that piece for the base of the sculpture in my last post and I used the other piece for the sculpture featured in this post. It seems as though I fall into the same trap every year at Touchstone – the piece I completed the first year, which a friend calls the Tuning Fork, was an attempt at creating movement. It is really hard to create movement and negative space when you are working within the limits of a log that is perhaps 12″ in diameter. I found myself falling into the very same space this year, with a piece that I started working on after I had completed two sculptures but I am starting to recognize the signs on the road and am better able to stop and reassess what I am doing. At any rate, I did exactly what I had given some thought to doing last year: I cut last year’s piece in half. Since I didn’t have a tape measure, I estimated where the mid-point was and, using a very sharp saw, set to work. It turned out to be fortunate that I didn’t have a tape measure, because the resulting pieces were of unequal length, which added to their appeal. If they had been of equal length, I think that would have subtracted from the way the two pieces play off each other. Once I had cut the piece in half, I played with the volumes and found that with a little chiseling, one piece would nest closely to the other. After a bit of trial-and-error fitting (I need to find a class in joinery to take!), the piece was essentially finished: 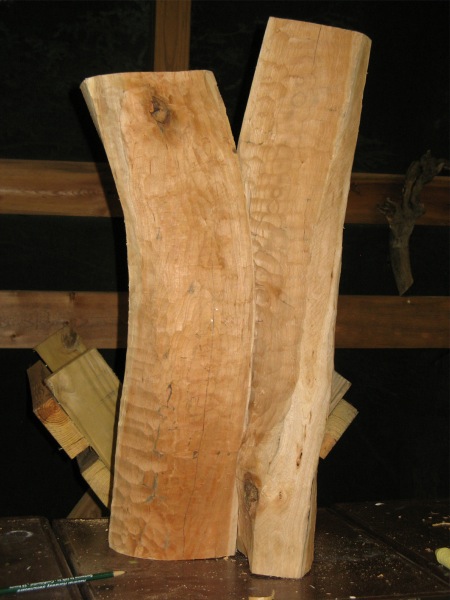 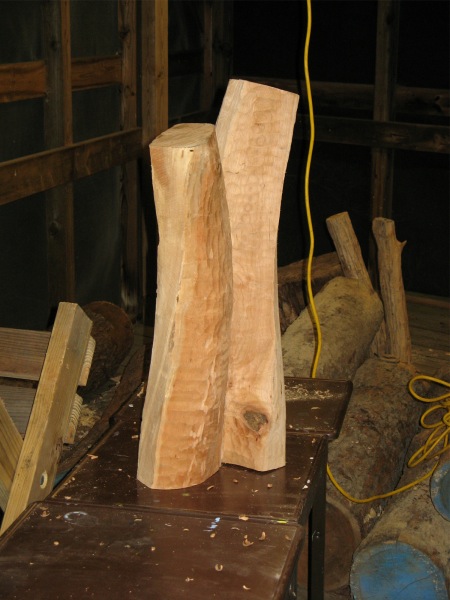 I used a Sureform rasp tool last year to dress the edges of the piece and I like the way that those surfaces relate to the chiseled surfaces adjacent to them. Thad Mosley, whose work is an inspiration for me, does the majority of his work with a chisel. A few of his pieces, notably Countee’s Leaf – for Countee Cullen and Three Arcs, play with contrasting textures, but most of his pieces are about weight in space and not about contrasting textures. I’m very much influenced by Mosely, as well as Brancusi, Hepworth, and Moore, but I do like contrasting textures. Mosley also uses stone in some of his sculptures, something that I’ve not been able to explore yet. I like the idea of not only the weight, but also the colors available in stone to contrast with the warmth of wood. Ideas to explore in the future! 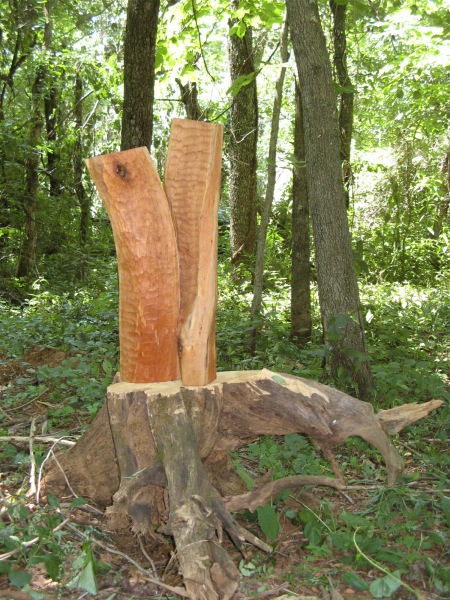 This shot was taken on my property in Floyd – the base is a little bit too big, but it was all that was readily at hand. I’ll have to come up with a base for this piece in the future. Stone, anyone? I have lots of good-sized pieces of quartz on the property. Now, that might be an interesting contrast!

As is the case with all sculpture, you really can’t appreciate it without seeing it “in the round” – photographs of sculpture just don’t work very well. You have to be there to walk around the piece and be able to touch the surfaces. Sculpture, in my mind, is a very tactile and visual art.