Haystack Mountain School of Craft was founded in 1950 and moved to its present location in 1962 after the State of Maine took most of their property via eminent domain for a highway. I found a video taken at Haystack in 2009 on YouTube but it was taken when there were no students there so it doesn’t give you an idea of what a bustling place it is when a workshop is in session. It does, however, give you a view of the buildings, which were designed by Edward Larrabee Barnes.

Both of my parents were commercial artists who, when they had the time, created their own work. That wasn’t often, though, as they had three children to raise. After my father died in 1984, my mother attended Haystack 6 times, coming back each time energized and full of new ideas. After she died in 2004, I established a fellowship in her name at Haystack, which enables artists who could otherwise not attend to come to Haystack.

Haystack is an internationally renowned craft school and I never thought that I would be accepted as a student. I had previously attended Touchstone Center for Craft for 5 years, but I had gotten bored there and wanted a new challenge. So I applied to Haystack and was very grateful when I was accepted. I wanted a new challenge and I got one. It was a very interesting experience, on many levels.

The class I applied for was in wood, taught by Jon Brooks. Before arriving at Haystack, I went to Jon Brooks’ website but didn’t investigate him further. Perhaps that was a mistake, perhaps not. I knew, after looking at his website, that he was a teacher that I wanted to learn from. After I returned home, I found out more about Jon Brooks. Here are two websites that provide more information about him. This one shows his house, which I just love, and this one provides more detail about his work. His wife, who was at Haystack with him, is a minister for the United Church of Christ. We had some interesting conversations about community. She, like Jon, is a very interesting person. 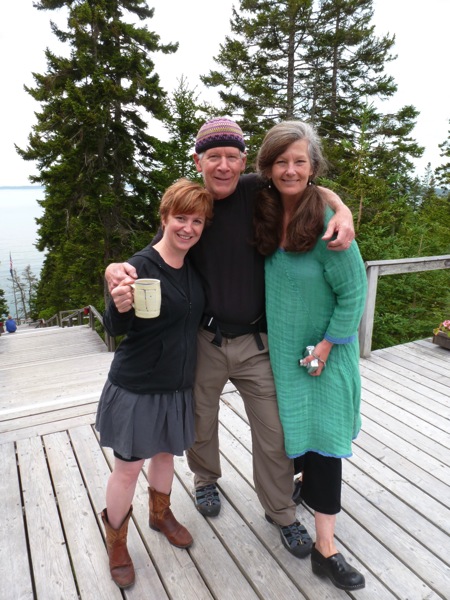 I had gotten stuck at Touchstone because I knew virtually nothing about how to connect the pieces of my sculptures and I also didn’t know how to grow further. I had gone as far as I could go and while Thad Mosley was a wonderful inspiration, I did not want to be a “Mosleyite”. Like Jon Brooks, I had been influenced by Barbara Hepworth, Henry Moore, Constantin Brancusi, and Isamu Noguchi. I also was a big fan of Wendell Castle, who Brooks studied under. But I didn’t know how to get beyond those influences and so that is why I decided that Jon would be the perfect guide. He was. He is a very gentle, but at the same time demanding teacher and he helped me get past my blockage. It wasn’t easy, either for him or for me. On the first day, we went off-island to gather branches from soft maple trees, none of which were more than 2″ in diameter. We brought them back, stripped the bark off of them, and then put them in a “hot box” in the clay studio to dry. Working with wet wood is difficult, at best. A “hot box” is a closet with heat lamps in it to speed up the drying process for clay pieces. We only had the use of the hot box for 1 full day, as the clay students needed the space.

We first practiced making joints – scarf joints, lap joints, through tenons and blind tenons. I knew what a mortise and tenon joint was, but I had never made one nor had it occurred to me to use such a joint in my sculpture. Then, we were tasked with taking the branches that we had harvested and making something. That is where I got really stuck and where Jon got a bit frustrated with me. After working with large pieces of wood for the last 5 years, I simply had no idea what to do with those skinny little sticks! I was stuck, again. Finally, after struggling for three days, I started on a piece, which I ultimately took home with me. 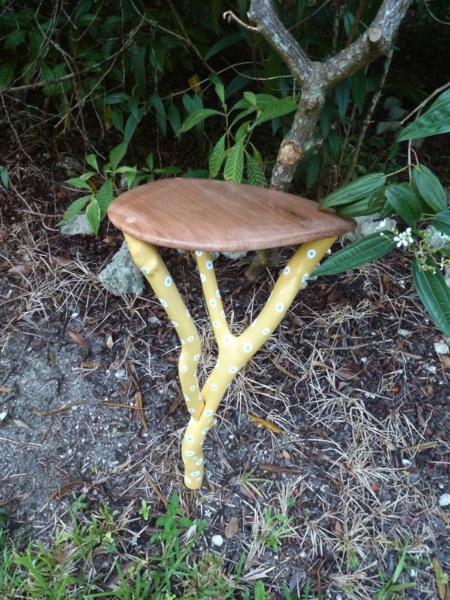 The top is cherry and the painted portion is soft maple. I didn’t do a very good job of finishing the maple portion – I just knocked off the bumps and sanded it roughly before painting it with acrylic paint. I was the only person in the class to use color on my piece and I understand why – it is quite a challenge when you add color to the equation. 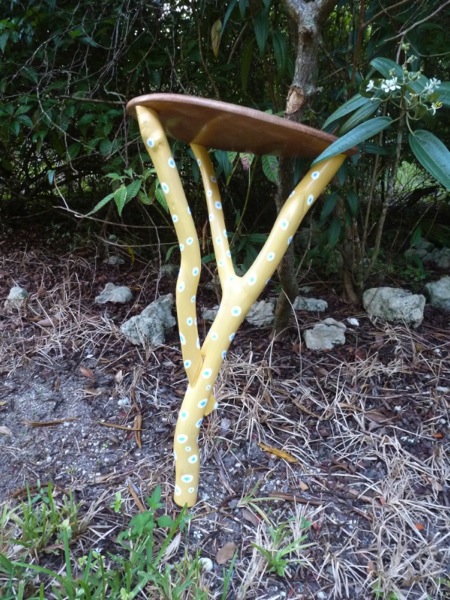 In this second photograph, you can see the crude through tenon that I made in one of the “legs” of the piece. The tenon is fastened with two pegs. The top is fastened with dowels through the top and then further secured with 1/8″ diameter brass pegs on the edge of the top, which aren’t visible in these pictures.

My piece got a lot of looks in the airports when I went home and everyone wanted to know what it was. It really isn’t anything but an exercise in creativity, but since people have to “know” what an object is, I called it a birdwatcher’s stool. That made them happy.

When I got home, I was so exhausted, both mentally and physically, that it took two days to recover. I could barely sleep the first night and I staggered through the next day before finally getting a decent nights rest the second night. I’ll have more to say in the future about how Haystack has upended my world.