Most of the trees on my property are really tall and I didn’t have binoculars with me to be able to see the leaves in detail. Some of the trees are very recognizable, like black cherry (prunus serotina), because of the distinctive bark and leaf. But others that I am not familiar with need to be identified by using the leaves as well as the bark. One tree that I found, an american basswood (tilia americana) was short enough that I could reach up and pull down a branch to take a picture of the leaves: 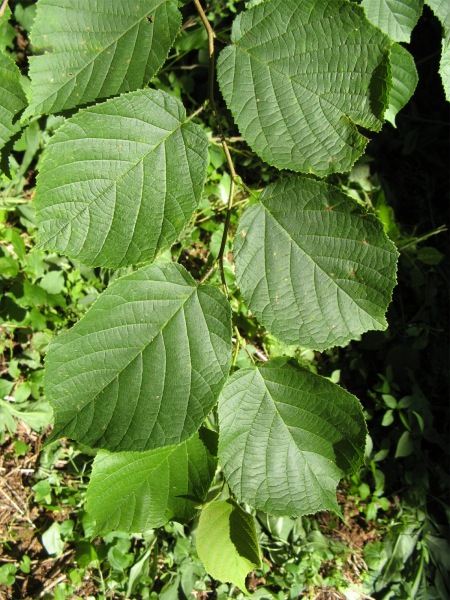 The wood is soft and light-colored (I used some in my second piece of sculpture) and the flowers produce abundant honey which commands a premium price. The inner bark was used by early settlers to make strips of material from which to weave baskets. The American Basswood is a large tree, growing as tall as 130 feet and as large as 48 inches in diameter at breast height. I’ll have to remember, next time, to take pictures of the bark of the tree to which the leaves are attached! Then I may be able to find bigger trees in my woods.

Update 8/7/2010: I’m reading The Forager’s Harvest, by Samuel Thayer, and it is a fascinating read, too! I had no idea that the flowers of the black locust (robinia pseudoacacia) were edible. Did you?
I learned, by reading Thayer’s chapter on american basswood that the name of the tree comes from a corruption of the word bast, which means cordage or textile fiber. The indigenous peoples used the inner bark of young basswood trees to make baskets and bags. According to Thayer, the young leaves of the tree make excellent wild salad greens, the flowers can be used to make a tea and the seeds, which taste a lot like sunflower seeds, are edible also. The drawback is that they are so tiny that the labor involved in preparing them to eat is almost not worth it. But chipmunks and deer mice love them!