Over at Black Agenda Report, Bruce Dixon has some choice words for Barack Obama. This altered picture is the “hook” that makes you want to read what he wrote: 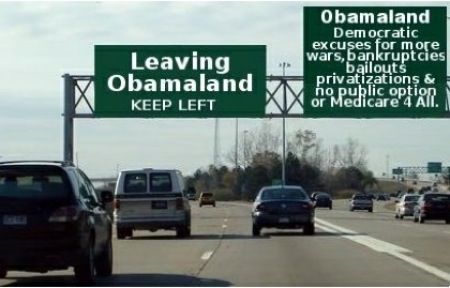 A lot of progressives are getting tired of President Obama’s waffling and excuses. He promised, in his campaign, to deliver Change We Can Believe In. It appears, after his back-tracking on the public option in health care, that he was cynically manipulating the crowds that adoringly flocked to him last year. Marshall Auerback, a firm believer in capitalism, has written an interesting article posted on new deal 2.0, in which he excoriates Obama for reneging on his campaign promises:

Putting the ‘change’ back in “change you can believe in”: The two faces of Barack Obama

So now it appears to be official: Obama does plan to drop the public insurance option. The “change you can believe in” President is metamorphosing before our eyes into the champion of the status quo. As if to add insult to injury, we have this gem yesterday, from Politico.com:

“On health care, Obama’s willingness to forgo the public option is sure to anger his party’s liberal base. But some administration officials welcome a showdown with liberal lawmakers if they argue they would rather have no health care law than an incremental one. The confrontation would allow Obama to show he is willing to stare down his own party to get things done.”

Why do the President and his advisors feel it necessary to prove a political point by “staring down his party”? Didn’t the Democrats just win substantial majorities in both houses of Congress, as well as winning the White House? Obama’s minions at the DNC certainly have no compunction about ringing us up to ask for additional donations in spite of the distinct lack of enthusiasm the President’s policies continue to engender.

We’re peeved. But the administration pours salt into the wound by spitting on its base, despite the fact that a broad number of polls indicate that progressive opinion, particularly in the area of health care, is much more profoundly aligned with popular opinion than the damp squib of a proposal currently being championed by the president.

Someone from the DNC rang me up last week to ask me for another donation and I basically said, “Fool me once, shame on you; fool me twice, shame on me.”

I got the usual quotes from the script, “Change is going to happen, be patient, etc., etc.,” and then the poor woman dared to ask what I found so troublesome about Obama’s presidency thus far. I told her, “It’s more a question of trying to find something which I don’t think is objectionable…the expansion of the war in Afghanistan, the paucity of imagination on health care (as well as treating the party’s base of supporters as if they were all a bunch of uncompromising idiots for daring to demand a public option in health care, which in itself was a compromise on single payer!), the Wall Street bailout, financial reforms which look like they were written by Jamie Dimon, I could go on…”

In any case, the caller certainly got more than she bargained for, but in a spirit of comity, I also told her I would be more than happy to open my chequebook again when I saw evidence of real change that was promised in 2008. Unlike Obama and the banks, however, I wasn’t prepared to shovel more good money after bad down a proverbial sinkhole.

It is obvious by now: Obama doesn’t get it. This might be the most profoundly disappointing Presidency most of us have experienced in recent memory — because it started with such genuinely high expectations, with a country desperate to be led in a new direction. Yet every voice the president hears in Washington urges incrementalism and caution. It’s the Warren Christopher presidency writ large.

The trouble is that we are in a time of crisis; we are at a point where deliberation and compromise foster more political dysfunction. We need federal government spending programs to provide jobs and incomes that will restore the creditworthiness of borrowers and the profitability of for-profit firms. We need a swift and detailed investigation of financial institution balance sheets and resolution of those found to be insolvent. We need to downsize “too big to fail” financial institutions, while putting in place new regulations and supervisory practices to attenuate the tendency to produce a fragile financial system as the economy recovers. We need to investigate financial fraud and to jail the crooks. We need a package of policies to relieve households of intolerable debt burdens. We need a health care system that doesn’t force loving couples to divorce in order to cope with rising medical bills. And above all else, we need a reformed politics, where ‘pay to play’ does not remain the operating philosophy of government.

Obama is now at 45 percent in the polls. But for the fact that the GOP has gone completely off the deep end, he would be in grave political trouble right now, but that’s no excuse for perpetuating the singularly awful policies of the past 30 years, as he continues to do.

Give the GOP at least a bit of credit. It still pays heed to its increasingly dwindling base, whilst Obama champions a non-existent bipartisanship.

True, he talks a good game (although even his eloquent speeches are starting to feel more like an insult to our collective intelligence, rather than a source of inspiration). As the experience of the early 1930s as well as that of the 1980s tells us, if left alone to deal with the current problems, market mechanisms will push management and owners of insolvent institutions to ramp up losses. The result can be massive deflation, massive bankruptcies, massive destructions of physical assets, and enormous unemployment. Without the security blanket of a proper health care system, social unrest will grow to the point that the entire socio-economic system will be threatened.

It’s early, but what sort of a legacy does President Obama want to bequeath to the nation? Sixty three years ago President Truman signed into law the Employment Act that committed the U.S. government to the goal of employment opportunities for all Americans. The act represented a pledge to avoid another Great Depression. It acknowledged that government had a vital role to play in establishing national economic stability and prosperity, a principle long ago established by Franklin Delano Roosevelt. One gets the sense with Obama that had he been the President in 1932, rather than creating the RFC or HOLC, he would have simply funneled money to people like Jack Morgan, Charles Mitchell and Richard Hay Whitney. LBJ escalated the Vietnam War, but his Great Society established a formidable domestic legacy. With Obama, we have an escalating war in Afghanistan, but in contrast to Johnson, he offers a domestic agenda which screams, “No, we can’t.” When Paul Krugman acknowledges that even Richard Nixon offered a more comprehensive set of health care reforms than our incumbent President, this should sound the alarm bells ringing in the White House.

Many times during last year’s campaign, then Senator Obama expressed admiration for Ronald Reagan’s “transformational” presidency. One now wonders whether we were meant to take this expression of admiration literally.