Kentuck Knob was one of the last houses that Frank Lloyd Wright built.  It was built for I.N. and Bernardine Hagan, the owners of an ice cream company in Uniontown, PA.  They had seen Fallingwater, built for Edgar Kaufmann, and fell in love with Lloyd’s approach to architecture.  Built in 1956, the Hagans lived there for 30 years, until they sold Kentuck Knob to Peter Palumbo, a wealthy English real estate developer.  Palumbo, also a patron of the arts, created a wonderful sculpture garden to display his collection of monumental sculptures. This shot of Kentuck Knob is from the corner by the path that leads out to the sculpture garden.

There are two pieces by Harry Bertoia as you start down the path.  This one is very intriguing – as the wind blows, the thin metal rods touch each other, creating a melodic tune: 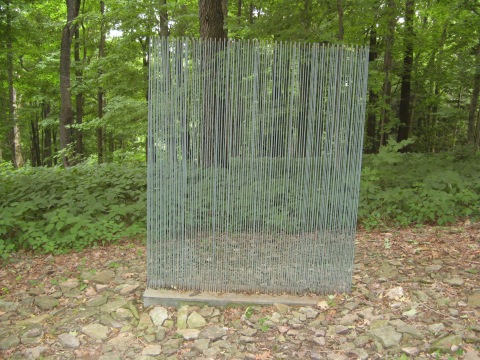 The sculpture garden has three pieces by Michael Warren, an Irish sculptor.  I found them to be very interesting, visually.  This piece is called “First Creation”:

After these pieces, the trail winds down through a mature forest and you shortly end up in a meadow, where there are more than 20 large pieces.  This massive oak piece, also by Michael Warren, had me gazing at it for a long time: 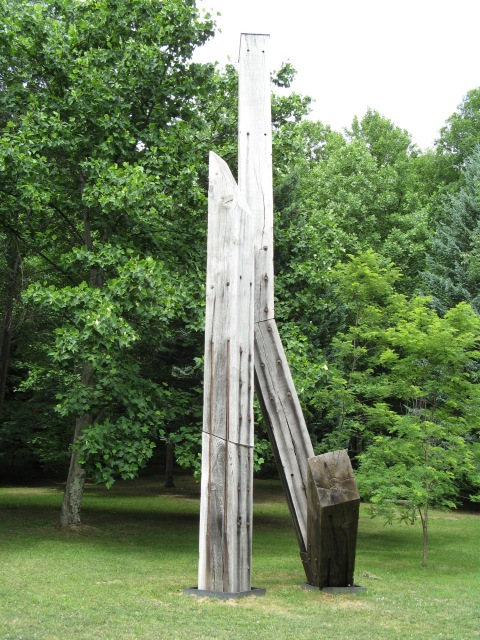 Allen Jones, a sculptor previously unknown to me, created this wonderful piece out of Corten steel.  This is a type of steel that oxidizes and creates a film that resists further oxidation.  No maintenance needed!  I enjoyed walking around and around the sculpture, feasting on all the different shapes presented to the eye:

The last piece that I’ve included in this post is by Andy Goldsworthy – there is another work by him a short distance away that resembles a Celtic round house.  Goldsworthy is well worth researching on the Internet – he has created a large body of intriguing sculpture: 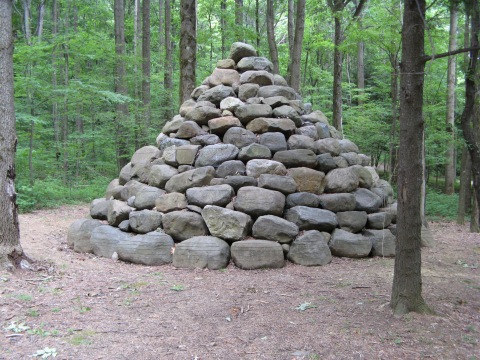 Kentuck Knob is located in Chalk Hill, PA, about 10 miles away from Fallingwater.  I toured both houses, not because I like house tours, but because how could I possibly forgive myself if I just drove on past Fallingwater?  I’m not real keen on Frank Lloyd Wright’s houses – they seem like they would be uncomfortable to live in – but there is no escaping the fact that his work blew the architecture profession wide open, allowing so much creative architecture to be built since then.