The Damson Plum (prunus domestica) is not, strictly speaking, a native of Virginia. The plant was introduced to the Americas by English colonists long before the American Revolution. So, while it has been in this country several centuries, it isn’t a native. But I’ll leave the bickering over what is or is not a native plant to the botanists. The plant gets its name from the Latin prunum damascenum, “plum of Damascus” and was cultivated in antiquity in the area around the ancient city of Damscus, which is the capital of modern-day Syria. The Romans were fond of the fruit and introduced the plant to England and from there, the plant made its way to the Americas. The first time I saw the tree, I thought it was an apple tree, because the leaf and the bark are similar. Perhaps this is why both the plum and the apple are in the Rosaceae family. The plum is the genus prunus, while the apple is the genus malus. But the small apple fruits (I have a number of apple trees on the property) don’t cluster like the plum fruits do: 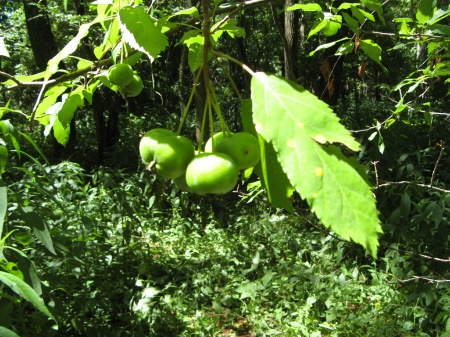 Most damson plums are too acidic to be eaten out of hand – instead they are used to make jellies and jams. They can also be used to make damson gin, which is made by adding the plums to a sugar and gin syrup for eight weeks or more. In Slavic countries, damson plums are used to make a distilled liqueur known as slivovitz. I doubt that I will do any of these things – I’ll leave the fruits for the birds and other animals to eat!