Ah, wingstem! A vigorous plant, indeed. Early on, in the winter, a friend pointed the plant out and told me that it was locally called “stickweed”. He said that it hadn’t been all that common when he was a kid but that now it was everywhere. It is apparently called stickweed because kids play with the dried stems in the late fall and into the early Spring. Wingstem (verbesina alternifolia) is a native Virginia plant and is a member of the aster family. It grows in sun or shade and later in the summer bears a very pretty yellow flower. For plant identification newbies, it is easily confused with the Yellow Crownbeard (verbesina occidentalis). The distinguishing feature between the two is that v. alternifolia, as the name implies, has alternating leaves, while v. occidentalis has opposite leaves. Here is a photograph of the leaf attachment of v. alternifolia:

Note also the presence of the thin membranes on the sides of the central stalk. Presumably, it is called wingstem because of these “wings”.

I have this plant over a large percentage of my property and I really can’t figure out why. I walked on neighboring properties and there is little or none, so I don’t know if this plant is identifying soil pH or minerals or what. Here, it is growing in pretty dense shade – it gets about 4′ tall under these conditions: 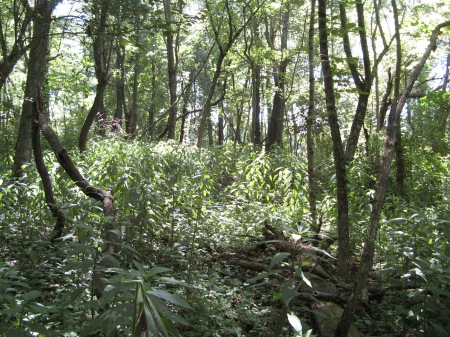 Here is a patch of wingstem growing in full sunlight, where it can reach heights of 8′: 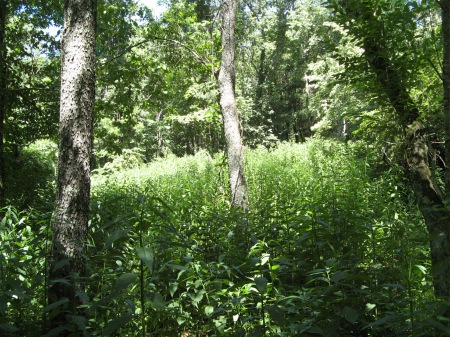 This particular area is one where the Bull Hog cleared out a patch of catbrier and multiflora rose one year ago. It is apparent to me that the wingstem plants were there all along, waiting for the briars and multiflora rose to be removed, for they sprang up like mushrooms!

The root of the wingstem is perennial – the stalk dies back each winter and the tuberous root sends up a new stalk in the Spring. In this picture, you can see the remains of the old stalk from last year immediately to the left of the new stalk this year:

I engaged Jason Rutledge, a biological woodsman, to do a forestry survey of my land last Spring. He ultimately decided that there wasn’t enough marketable timber on my property to justify his time, but he did make the observation that the lack of understory trees on my property was because of heavy deer browsing. After seeing the extent of the population of wingstem on my property, I think he was mistaken. I think the lack of an understory is due to the presence of the wingstem, for it shades out any new seedlings of canopy trees. In the areas where I don’t have much or any wingstem, there are numerous seedlings of different species, but where the wingstem is, all I have are a species of bedstraw and virginia knotweed. Using an herbicide to kill the wingstem is not an option – there is too much of it. My current thinking is that I will need to manually remove patches of wingstem and allow seedlings to establish themselves in those areas. Perhaps one day I will learn more about wingstem and the conditions it thrives under. If I can learn about that, I may be able to take some counter-measures to reduce the amount of the plant that I have on my land.

Update, 7/17/2010: After spending a substantial amount of time online doing research on this plant, I finally found a comprehensive account of the plant at the Illinois Wild Flowers site:

The plant’s “preference is full sun to light shade and moist to mesic conditions. Wingstem typically grows in fertile soil that is high in organic matter. … Habitats include moist prairies, moist meadows near rivers and woodlands, woodland openings, woodland borders, floodplain forests, areas adjacent to woodland paths, thickets, savannas, partially shaded seeps, partially shaded areas along rivers, pastures, abandoned fields and roadside ditches. The plant usually doesn’t wander far from woodland areas or bodies of water. The deciduous woodlands where this plant occurs often contain moisture-loving trees as American Sycamore, American Elm, Hackberry, and Silver Maple. Wingstem competes well against other plants in both high quality and disturbed habitats. … The caterpillars of the butterfly Cholsyne nycteis (Silvery Checkerspot) and Basilodes pepita (Gold Moth) feed on the foliage. Because of the bitterness of the leaves, Wingstem isn’t consumed by deer, rabbits, and other herbivores to the same extent as many other plants.”

This description fits my property to the proverbial “t” – I have a very large American Sycamore on the property and I may have Silver Maple, Hackberry and Elm – I haven’t identified those trees yet but now that I have been tipped off that they may be there, I’ll keep an eye out for them. It appears that my strategy of clearing small areas and then planting moisture loving trees will be the best way to reduce the population of wingstem on my property. Wingstem accurately maps the moist and mesic areas of my property – the drier areas do not support the plant. Very interesting. I would hazard a guess that the area of my property that some friends speculate are the remnants of the ancient Little River riverbed are too dry and too well-drained to support a population of Wingstem.