In a comment on my post “Tea Party Tax Protests and Reality”, Debi asks, “Jeff, what is wrong with the Fair Tax?” I replied without really investigating the Fair Tax and made some assumptions that were probably not correct. You know what assume does, don’t you? Makes an a** out of you and me, right? So, in the interests of correcting my misperceptions, I went out and did a bit of research on the Fair Tax issue. I found it most interesting that I had a very hard time finding a progressive critique of the Fair Tax. Most of the critiques that I found were on hard right Libertarian sites, among them the Mises Institute, which endorses Austrian economics and Murray Rothbard. But I did find a liberal site, A Taxing Matter, that I thought offered a very balanced critique from a progressive viewpoint. The post there endorsing Bruce Bartlett’s analysis struck me as covering all the points that I would have liked to cover. Bruce Bartlett, I should note, is also a conservative who at one time had a column on Townhall.com, the premier conservative website. I enjoyed reading the posts on Professor Beale’s blog. I think she is even-handed in her coverage of the Tea Party phenomenon. To entice Debi to visit her blog, I’m “borrowing” the cartoon that she posted on her site – one that I agree with! 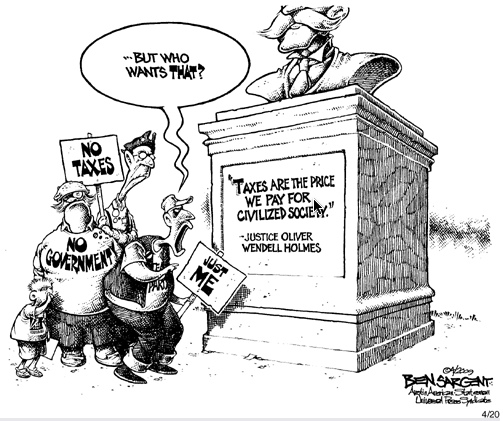