For a few years now, the right wing talking heads have been all up in arms about something called the “Nanny State.” I’ve not paid a lot of attention to their whining, because I don’t have a lot of respect for their rants – they don’t have a coherent philosophy as a foundation for their complaints. As proof of this statement, read this blog entry on the premier conservative website, Townhall.com. The thrust of this blog post and others like it is that the Liberal Nanny State has to be defeated because it strips the citizenry of their freedom to do as they wish. Government is evil and must be drowned. As Grover Norquist so famously stated, “My goal is to cut government in half in twenty-five years, to get it down to the size where we can drown it in the bathtub.”

What I find interesting about people who repeat these talking points is that they almost never apply their philosophy, such as it is, to economic matters. Sure, there are a number of Libertarians (of various stripes) who extend these complaints to the economic arena, but the chance of libertarianism ever becoming mainstream is extraordinarily small. Libertarians, like Socialists and other Leftists, spend most of their time arguing over the number of angels on the head of the proverbial pin and never offer a constructive agenda of how to bring their visions of society to life.

Today, I discovered The Conservative Nanny State, by Dean Baker. It was published in 2006 and is a withering attack on those who vilify Liberals for their regulatory mind-set. He asks, in essence, why it is O.K. to attack the Liberal Nanny State for its suppression of personal freedoms but it is not O.K. to attack the Conservative Nanny State for the generous support it has given to corporations. In his book, Baker shows how corporations have taken control of government and passed legislation that has created a very unjust economic playing field for anyone but themselves. This lack of regulation has resulted in the financial crisis that we currently find ourselves in. The book is 133 pages long and starts with a preface and a short synopsis of each chapter, as a way of introducing the subject matter. Should you wish to delve further into the content, the full chapters start after the end of the short summaries of each chapter. This format is novel to me, but I found it useful, because we are all very busy and taking the time to read the entire book may be more than we have time for. The book is licensed under the Creative Commons and is not copyrighted. It is a free download, in either HTML or Adobe Acrobat format, from Baker’s website. 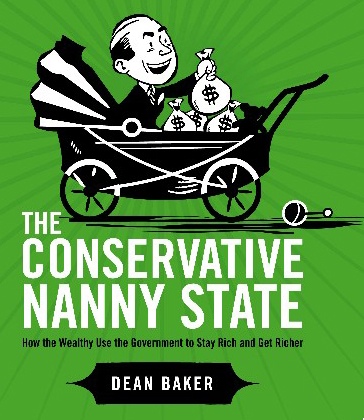